Whyte’s back-to-back sales of “Movie Posters” and “Rock & Pop Memorabilia” on Saturday 31st May, at the Freemason’s Hall, 17 Molesworth Street, Dublin.2. are sure to excite lots of interest from collectors far and wide.

The “Movie Posters” sale kicks off at 12 Noon and features over 350 Lots – a single owner collection – covering just about every movie genre.

And, if that isn’t enough for you, following on from the poster sale – at 4.00pm – there’s a sale of “Rock & Pop Memorabilia” – 179 Lots of rare posters, photographs, autographs, vinyl records, clothes, musical instruments and much more besides. 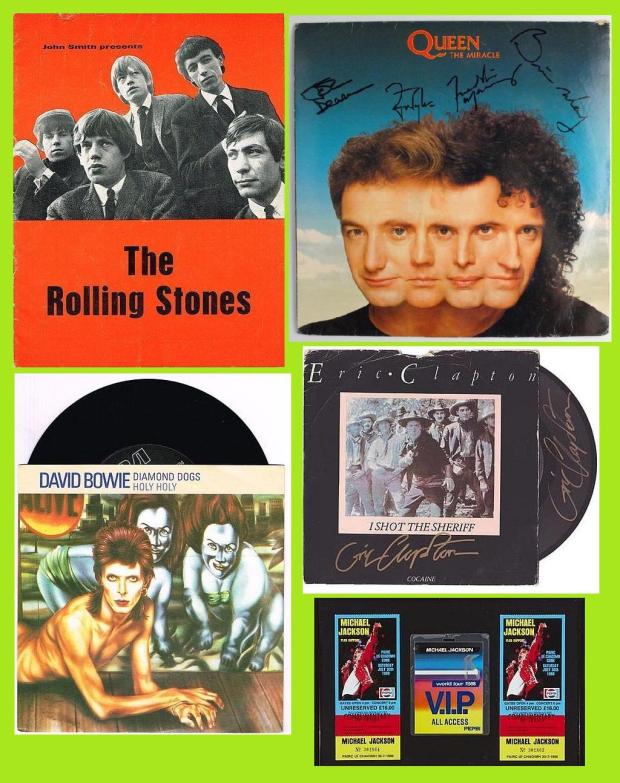 Two sales not to be missed!

Viewing and full details/catalogues links on the Auctions Page below:

The first ever dedicated sale of Pop & Rock Memorabilia held by Whyte’s at the RDS on Sunday 24th March had them rocking in the aisles with the star item, a unique but well worn recording of Elvis Presley’s “That’s All Right Mama’, fetching a breath taking €65,000. It’s not much to look at, the sort of thing that one would pass by if come across in a charity shop!

The important single sided demo acetate record with Memphis Recording Service label stamped with W.H.B.Q. radio station marking, with typed inscription “THATS ALL RIGHT/Elvis Pressley [sic]/with/Scotty and Bill”. On the blank reverse an etched inscription in manuscript “10/3/55/xxxxx [illegible – possibly “signed”] out/no good” (probably a decommissioning note, which allowed Dewey Phillips to remove it from W.H.B.Q.) The disc is a 45 rpm acetate, 10 inches in diameter. There are two holes in it, one at the centre and one slightly below and to the right, under the word “Bill”. The disc is very scratched – not surprising after a year in the radio station, and 58 years since – but still plays well on a sophisticated turntable and amplifier. 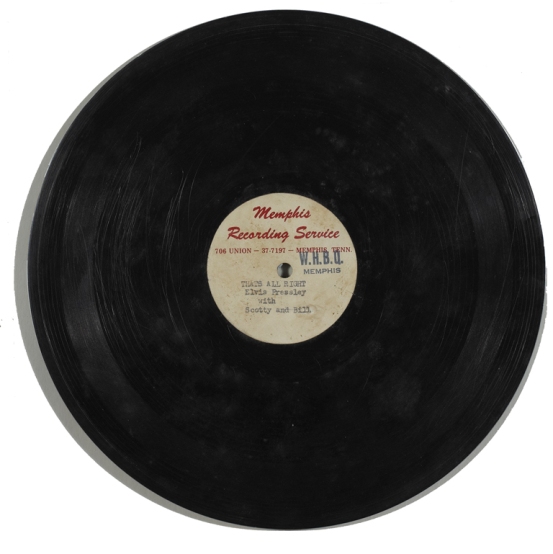 The only known surviving promotional copy of his first commercial recording, and the unique example played publicly by disc jockey Dewey Phillips for the first time. That’s All Right” is the first commercial single released by Elvis Presley. It was recorded on 5 July 1954 and released on 19 July 1954 with “Blue Moon of Kentucky” as the B-side, Sun records 209. It is regarded as one of the greatest rock and roll songs ever. The song was written by Arthur “Big Boy” Crudup, and originally recorded by him in Chicago on 6 September 1946, as “That’s All Right”. In early March 1949, the song was re-released under the title, “That’s All Right, Mama”. On both the issued record and on this demo acetate the label reads “That’s All Right” (omitting “Mama” from the original title), and names the performers as Elvis Presley, Scotty and Bill. The acetate however has an incorrect spelling of Presley’s last name “Pressley” During the summer of 1953 a young and unknown Elvis Presley walked into the offices of Sun Records and the Memphis Recording Service in Memphis, Tennessee. Sam Phillips the owner and operator of Sun recorded two songs for Elvis for a fee of just over $4 which Presley planned to give to his mother as a birthday present. Phillips was not overly impressed by the young singer but his business partner Marion Kreisler repeatedly asked Phillips to bring him in for another session. Phillips relented and set up a session for 5 July 1954 where Elvis would sing accompanied by Phillips’ two favourite session musicians Scotty Moore and Bill Black. Phillips presided over, to him a rather pedestrian, and unexciting recording session of Presley that evening at Sun Studios. Presley, Moore, and Black were taking a break between recordings when Presley started fooling around with an up-tempo version of Arthur Crudup’s song “That’s All Right, Mama”. Black began joining in on his upright bass, and soon they were joined by Moore on guitar. Producer Sam Phillips, impressed by the impromptu upbeat tempo of the song, asked the three of them to start again so he could record it. Black’s bass and guitars from Presley and Moore provided the instrumentation. The recording contains no drums or additional instruments. The song was produced in the style of a “live” recording (all parts performed at once and recorded on a single track). The following evening the trio recorded “Blue Moon of Kentucky” in a similar style, for the B-side to “That’s All Right”. Although this was Presley’s third recording session at Sun Studio this was his first commercial release. His first two sessions, in the summer of 1953 and January 1954, had been private recordings. Upon finishing the recording session, according to Scotty Moore, Bill Black remarked, “Damn. Get that on the radio and they’ll run us out of town.”Sam Phillips recorded the song onto acetate and gave it to local radio station disc jockeys Dewey Phillips (no relation) of WHBQ. Philips promised to play it and on 7 July 1954, he kept his promise playing this acetate of “That’s All Right” publicly for the first time on his popular radio show “Red, Hot & Blue”. On hearing the news that Dewey was going to play his record, Presley went to the local movie theater to calm his nerves. Interest in the record was so intense that Dewey reportedly played the record 14 times and received over 40 telephone calls. A reluctant Presley was persuaded to go to the station for an on-air interview the same night. Unaware that the microphone was live at the time, Presley answered all of Dewey’s questions, including one about which high school he attended: a roundabout way of informing the audience of Presley’s race without actually asking the question.

The resounding success of “That’s All Right” ensured that it was officially released just 12 days later on 19 July 1954. It sold around 20,000 copies and entered the local Memphis charts. This recording is one of the most important in music history not only because of the fact that it catapulted the young Elvis Presley into the limelight and set him on the path to stardom but also because of the fact that it is widely recognised as the song that started Rock and Roll. This song was the first to contain all of the elements that we now associate with the genre.